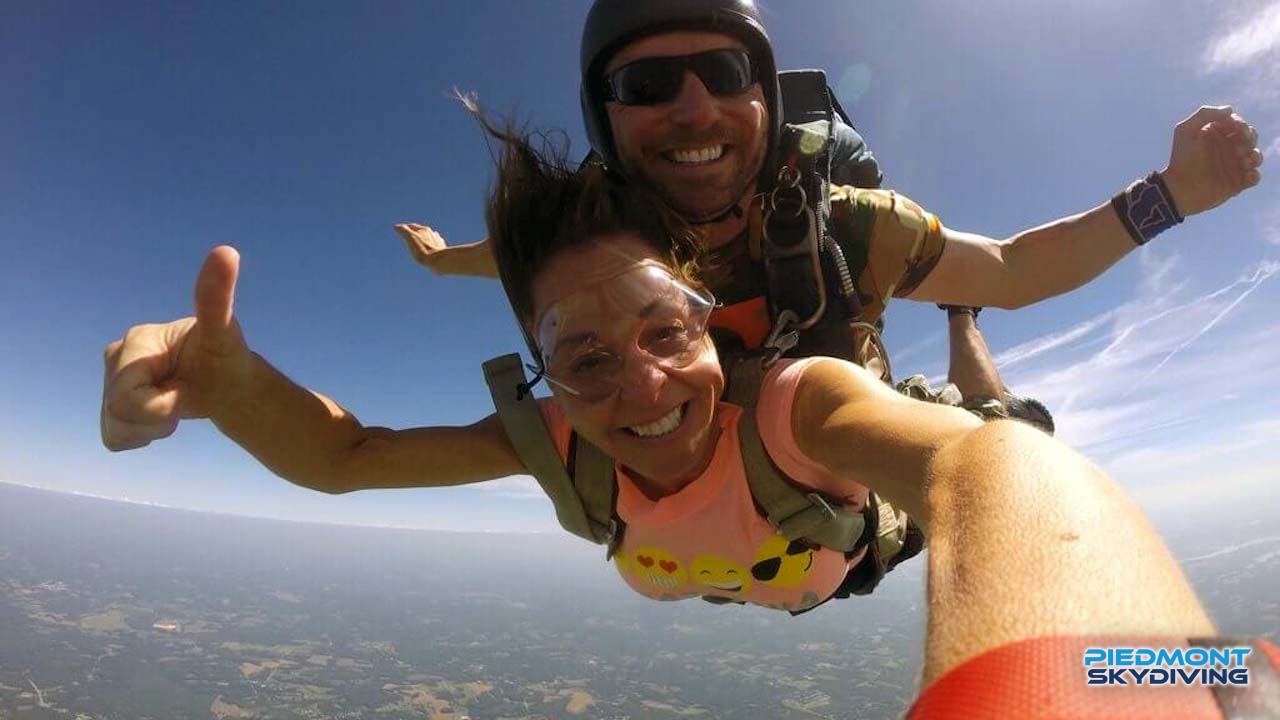 Ashley Bayse is a 4th grade teacher in Thomasville, NC. She doesn’t describe herself as any kind of adrenaline junkie (in fact, she was in high school by the time she’d summoned up the chutzpah to ride a rollercoaster).

She is, however, a singularly determined woman, as her favorite hobby–marathon running–aptly illustrates. Ashley got into running when she was in college (after being a self-avowed running-hater throughout her high school sports career). She started running half-marathons–and then, boom.

“One of my friends runs full marathons,” Ashley explains. “She would run the full and I would do the half. One day I got competitive with myself and did one. Now I love marathons, which is crazy to me, because if you’d asked me a few years ago if I would ever run a marathon, I would have said no. Then you realize what you’re actually capable of, and break through.”

“It’s a huge feeling of accomplishment,” she continues, “And it connects with skydiving. I felt so accomplished when I made that jump. It was one of the most incredible experiences of my life.  It goes hand in hand.”

Ashley’s skydiving story starts in a familiar place. As happens so often in our sport, Ashley made her first jump on account of a milestone that needed celebrating. The thing was: It wasn’t hers.

“One of my best friends was turning 30,” Ashley explains, “And her husband reached out to me to say he was going to surprise her with the jump as a gift, and to ask if I would want to go with her as moral support. At first, I was kind of hesitant–but it was always something I had on my bucket list. I honestly didn’t know if I wanted to do it right then, though, because it was a little scary to think about. But of course I told him I would.”

We have to give the birthday planners credit for their awesome setup, too.

“We went out to dinner,” Ashley says. “Her, her husband, me and my boyfriend. After we had eaten, and then I handed her the envelope with the gift certificate.  I said this is something for you. When she opened it, she and was, like, no way, seriously? She was excited–much more excited than I was at the time, because all I could think about was–okay–this is the end of my life.” She laughs. “Okay, not really. But I was nervous!”

Ashley, of course, was not alone in that feeling. In fact, everybody who goes out for a tandem skydive is at least a little freaked out by the idea of jumping out of a plane, and that’s the reason it is so powerful. After all: If it isn’t scary, who cares?

Ashley remembers that she was extra-anxious the night before.

“It took me a little while to go to sleep,” she recalls. “And when I woke up the next day, my heart was beating faster, because I knew my jump was going to be that day; that afternoon. I didn’t know what to expect, not at all.”

Ashley spent the morning “trying to prepare [herself] mentally” before driving over to the birthday girl’s house. To set out for Piedmont Skydiving with a happy little group of friends and family.

“We had an appointment, so it didn’t take long at all,” she says. “We filled out our paperwork, and the next thing you know, they’re suiting us up. I was like oh my gosh, this is it. Then I met Scott, who I was going to jump with, and he was awesome. I felt better immediately.”

“He was, of course, like, so sarcastic,” she giggles, “But really funny at the same time. He made me forget what I was doing, here and there, at times, so I could laugh in the moment and not just be freaking out, because that’s what I was doing on the inside.”

Ashley’s friend went first. Then it was time for Ashley.

“We got on the plane,” she remembers, “And Scott was doing all kinds of funny things on camera, again taking my focus off of the nervousness. When we got halfway up to exit elevation, I was like oh my gosh, we are only halfway up. So, led by Scott, we sang ‘Living on a Prayer’ at the top of our lungs. It was hilarious.”

“The initial stepping out of the plane was the most fearful,” she continues, “Because I knew there was no turning back. But [Scott] prepared me so well, even though I wasn’t necessarily trusting myself. And you know what? It was awesome. I actually signed up to do it again.  I got myself and my boyfriend one for a Christmas gift because I loved it so much.”

Ashley’s appointment for her triumphant return to the sky is in late March, when springtime is back in the Carolinas. We can’t wait to see her again–and we’re stoked to see that she’s as in-love with skydiving as we are.

“I literally feel like I can do anything now,” she enthuses. “If you’re thinking about skydiving, just go do it. I know that’s not a lot of encouragement, but I didn’t think I could jump out of an airplane, myself. But once you jump out of that airplane, you don’t even think about all of those things you were worrying about prior. You don’t think about death; you are in that moment, and it is so exhilarating.”

“I think I will be able to say in 50 years–if I live that long–that my first skydive was one of the best moments of my life,” she insists. “Life is so short. If you don’t take those opportunities, you miss out on a lot. I would have missed out if I’d have kept putting it off. Do it now, and do it wholeheartedly. If you don’t like it, and you don’t want to do it again, that’s okay. But I nobody I’ve ever talked to who has done it has said that.”

“It will be something that you go in with life,” she smiles, “And it is something you keep with you forever. You’ll always remember it. It is just awesome.”