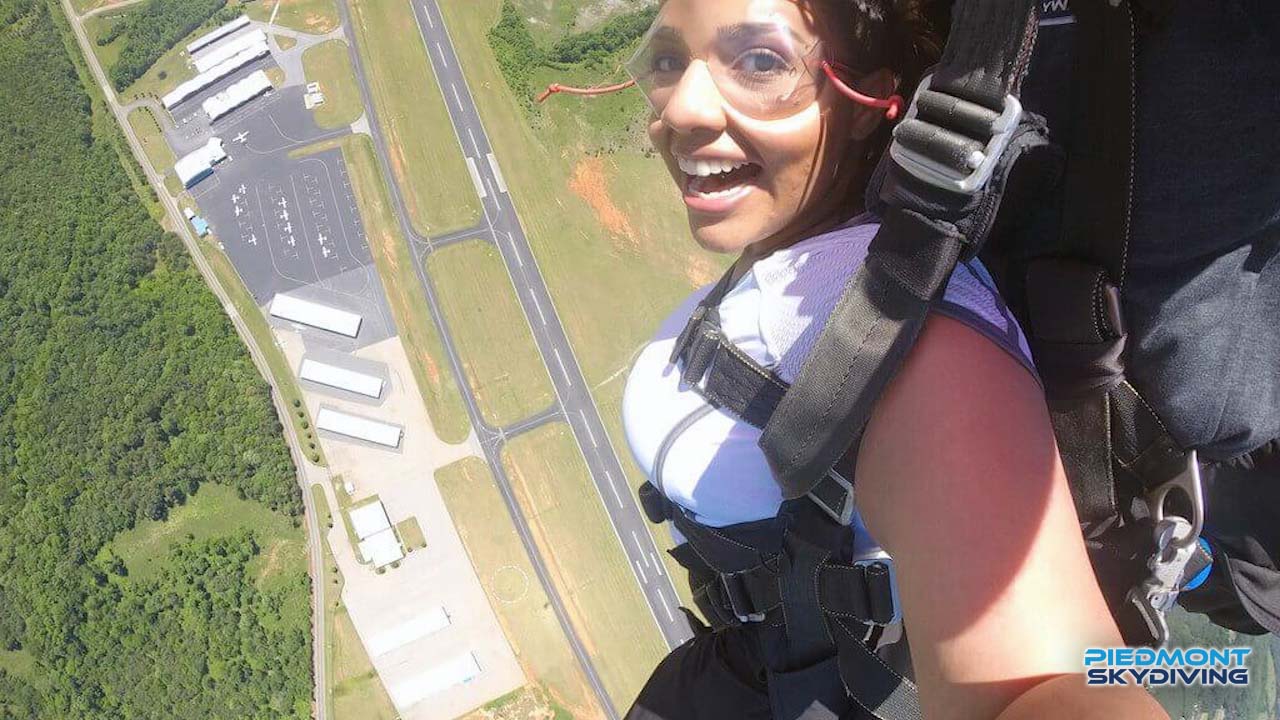 First off, she’s a university student–an Anthropology major, working towards a degree in Forensic Anthrolopogy. Secondly, she’s a skydiver. Finally!

“I have always been looking for adrenaline-type things to focus my attention,” she explains. “I used to be a soccer player–a striker. For me, going and kicking the ball into the goal was a huge rush of adrenaline. When I stopped doing that, I started looking elsewhere for that feeling. I’m trying to do things that give me that feeling but are healthy and not destructive. Skydiving is perfect. It’s very positive.”

“I went bungee jumping when I was 18,” she adds, smiling. “That freefall wasn’t long enough. I knew right away that I wanted to go skydiving, but I wouldn’t have done it if it weren’t for my friend. I had told him I wanted to go, and I had been putting it off. One day he just sat me down at his computer and told me to give him my debit card. He signed me right up for it, and I knew it was happening.”

Krysta and her friend were supposed to make their first jump that weekend, but it was in January. There was–of course!–rain, and the bad weather lasted for what felt like ages. The jump was delayed by a couple of weeks.

“It got to the point where I figured it was never going to happen,” she remembers, “But then, one Thursday, I called in and they told me that it was going to happen the next day. After that, I was like, Oh my gosh. This is happening.”

Krysta arrived at Piedmont Skydiving after a restless night’s sleep (which is, by the way, totally typical).

“There were only a few people there,” she recalls. “There was this girl in front of me, and was going before I went. She looked cool. I knew we could be friends. I asked her if this was her first time, too. She told me she had done it ten times already. I thought in my head, I want to go ten times, too!”

Even so, Krysta was nervous. Her dad had come along to take pictures, and his presence helped calm her nerves, but she spent the pre-jump time pacing the room, thinking about what she was getting ready to go and do. The ground school experience was comforting, and watching the landing of a previous jumper helped her, too. Finally, it was time to gear up and go.

“I was more excited than scared on the ground,” Krysta laughs. “The actual scary part didn’t hit me until we were already up. I think we were at 7,500 feet. I looked out the window and I was overcome by the whole idea. I couldn’t breathe very well, but the instructor I was with talked me through it: to just breathe; that it was going to be okay. After that, it was like a switch flicked. I was ready.”

The jump was perfect, and inspired Krysta immensely. In fact: These days, Krysta is figuring out a strategy to earn her solo skydiving license and do a lot more freefall.

“When I got home, I sat down and spent, like, hours going through Instagram looking at all of these videos of people skydiving,” she laughs. “I had fallen in love for sure. I’m always asking people now if they want to go skydiving with me.  I have asked my dad and a couple of friends to go, and they tell me maybe someday. I’m, like, No! Let’s go now!”

“If I had never gone, I would have missed out something that was totally life-changing,” Krysta enthuses. “You just have to face that fear. The first time you go is probably the scariest. But I can tell you honestly that skydiving is the best thing that I ever did for myself. Just conquer that fear!”

Next Post: What Was Waiting For Me Outside the Airplane Door