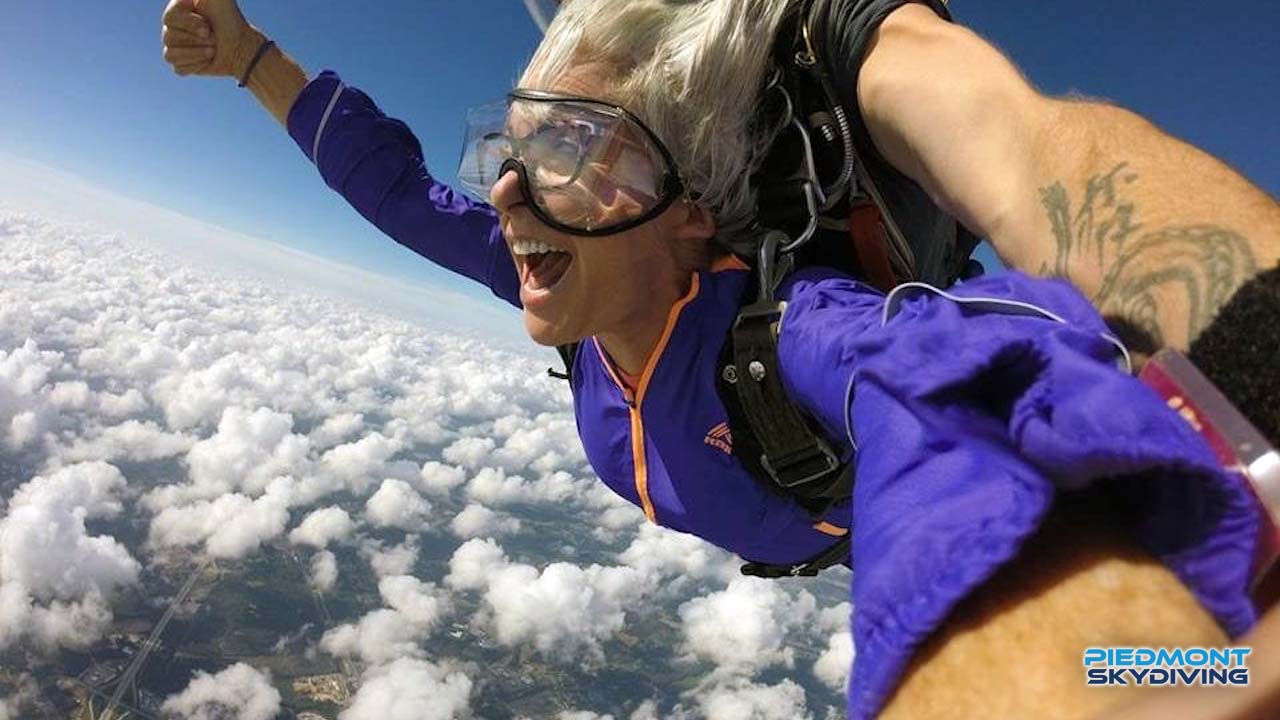 When Lisa Cook arrived at Piedmont to make her first skydive, we were blown away by her positive energy, her beautiful family, and her amazing story. It’s pretty miraculous we ever got to meet her, as a matter of fact: Lisa was just celebrating the remission of a cancer that had almost claimed her life.

Lisa grew-up an only child in a tiny, rural town in Virginia, “blessed with the best parents in the world,” in her own words. A born writer and designer, she graduated from Virginia Tech with a degree in communications and a handsome fiancé–with whom she just celebrated 15 years of marriage. A career in print media soon welcomed Lisa’s energetic contributions and, as the years rolled on, two children came along (Meredith, now 11, and Andrew, now 7). It was, by any estimation, a charmed life.

When Lisa was 36–just two years ago–the diagnosis came. It was Stage IIB Her2+ breast cancer. It was a decimating blow.

“I have a ridiculously strong family history of the disease on my father’s side,” Lisa explains, “And I’m BRCA positive, so at the same time I underwent my double mastectomy, I also had a total hysterectomy/oopherectomy to reduce my risk of ovarian cancer. I endured 5 months of dense-dose chemotherapy and a year of targeted therapy as well as multiple surgeries and complications, but fortunately–and gratefully–avoided radiation.”

To say that the cancer was hard on Lisa is an understatement. It was, in fact, brutal.

“There was a woman who was going through treatment at the same time I was,” Lisa remembers. “And she was roughly the same age. We had the exact same diagnosis and treatment. She never took off work. She never threw up. As far as treatment goes, hers was the best case scenario. My experience, on the other hand, not so much. I was hospitalized multiple times–infections; complications; other reasons.”

As a mother of two young children–ages 4 and 9, at the time–giving up wasn’t an option. “I just took it day by day,” she continues, “Because to look beyond that was overwhelming. Especially when I was first diagnosed, and I was trying to reconcile the fact that I was just told that I could die….even though those words weren’t technically spoken.”

Months and months of day-by-day living went by. Lisa, her family, and her friends braved it together–the surgeries; the emergency rooms; the exhausting treatments. It was a heavy time–so, when the happy news of remission came, there was no better place to celebrate but the sky.

“Skydiving was something I’d wanted to do since childhood,” Lisa explains. “My parents and I lived on an acre that sat at the edge of a farm. On the other side of that farm was a tiny little airport that housed a skydiving operation. I would spend sunny days sitting on the deck and watching the planes go up. I’d keep an eye on the people falling out of the sky and watch those big, colorful parachutes pop open. I can remember, more than once, a couple of them landing in the backyard, when the wind pushed them off course. I always thought that it was really cool and that I wanted to try it one day. But as things do…I mean, life gets in the way sometimes. A lot of other things took precedent.”

So: Lisa started telling the people around her that she planned to celebrate her cancer-free status by making a skydive. Interestingly, lot of people balked.

“People asked me why, after facing death and surviving, would I ever choose to put myself in a position where I could die again?,” Lisa laughs. “My answer was simple–I chose to skydive. It was my choice; cancer wasn’t. It was my way of giving cancer the finger; the final send-off. I choose to live my life to its fullest, without fear or reservation. I choose to live in such a way that, looking back when I’m pushing 90, I have no regrets.”

From our perspective as skydivers and dropzone owners, Lisa’s decision is no surprise at all. Every day, we meet new people who are using this amazing sport as a tool for facing challenges and celebrating life. A lot of people who come to the sport are looking for breakthroughs; for solutions; for ways to move forward in the bravest way. In that way, Lisa’s decision isn’t crazy at all; she fits right in.

On the day of the jump, Lisa certainly lived up to the “Awesome Sauce” t-shirt she was wearing. Even though she was nervous–as everybody is!–she impressed everyone at Piedmont with her thoughtful, ready-for-anything approach. When she landed, she was surrounded by Rob, her husband, her two kids and her steadfast friends Kim, Sara and Toni, who also jumped. It was a really touching moment to watch.

“I wish I had known how quickly it would go by,” Lisa muses. “Because when that ‘chute popped, I could not believe that I had free-fallen for 5,000 feet. I was, like, what the hell. I couldn’t believe it. Even though I don’t know how you prepare for that, especially your first time. I wish I had known to savor it a little bit more, because–even though I know I’ll go up again–I’ll never have a first time skydiving again.”

These days, Lisa is digging into the work of enjoying her clean bill of health. She loves reading, baking, dancing, going to concerts, working to open her own shop on Etsy and hanging with “the most fantastic group of friends.”

“I do live unafraid now,” she grins. “I’ve done things I never thought I’d have the courage to do, in addition to skydive. I’ve walked in a fashion show in my underwear! I’ve dropped the puck at a Charlotte Checkers game, and I’ve gotten a boss tattoo, to name a few. If you’ve looked death in the face, everything else is cake.”

Each letter of Lisa’s tattoo is in the handwriting of a person who helped her become a Survivor.

“It’s kinda cliché to say that you only live once,” Lisa smiles, “And that you have to make the most of what you’ve got. But that’s truly it: Facing death really does give you a new lease on life, as tired as that may sound. My journey has forced me to learn to shake the trivial and really focus on the important things: my family; what makes me happy. Not that I wasn’t happy before, but now I go after it with more gusto. That’s what brought me back, that’s what brought me to skydiving, and that’s what’s going to carry me forward.”

“I want people to know that again, as cliché as it is,” Lisa concludes, “Do not let fear get in the way of what you want to do. Life truly is finite. We only have a set number of days on earth. Don’t waste them by being scared. That’s it. Just don’t waste them on being scared.”