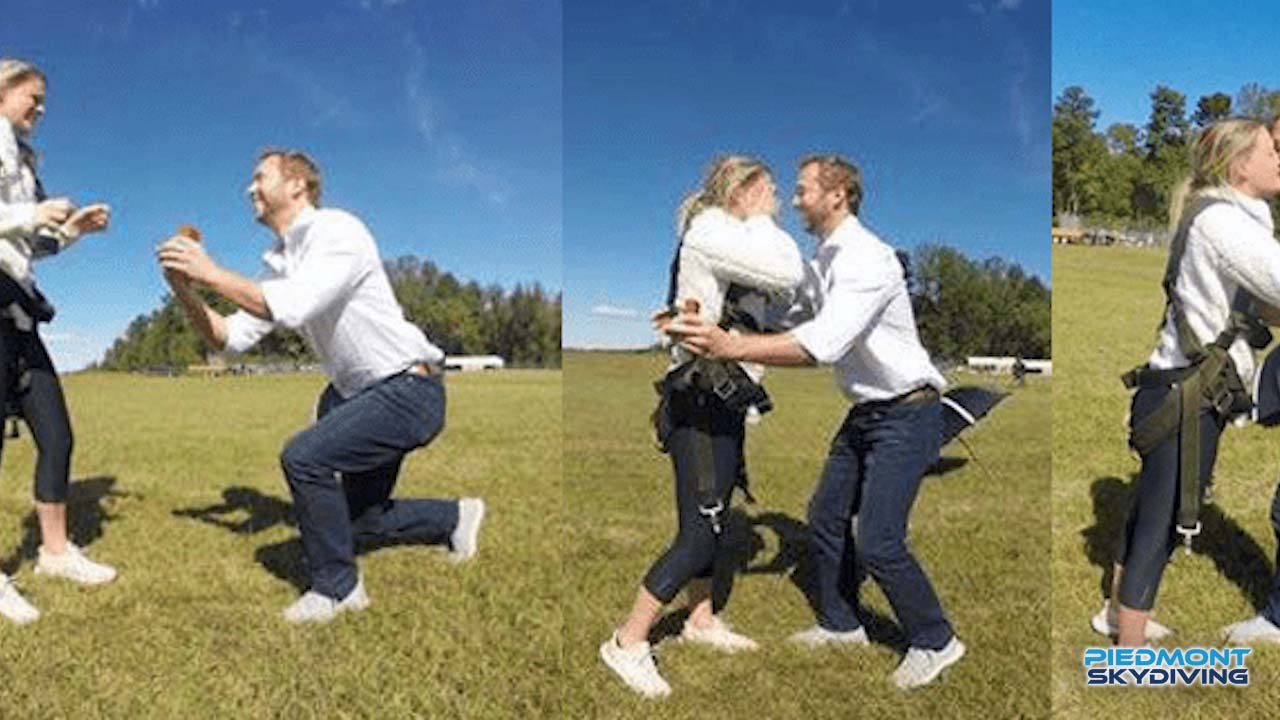 About a year ago, Brittany was visiting Greenville, SC, which is where she currently lives (and where Bryan is from). She was just passing through–visiting with friends for a friend’s graduation. The girls were out celebrating afterward when Brittany starting attracting some attention.

“My friends kept telling me this guy at the bar was looking at me, and I needed to go over there and see if he would buy me a drink,” she remembers. “And I looked over, and he seemed like one of the warmest and most inviting people.”

“[My friends] told me jokingly to put on a white coat, go over there and act like I had just graduated, too,” she laughs. “He immediately hopped up, he gave me his seat and we started talking. He was very sincere and listened to me so well. I could immediately tell he was a really genuine person. From there, we did not miss a beat. Not a day did we miss talking.”

The couple started dating in January; Brittany moved to Greenville at the end of February. She had started looking at jobs in town before she met Bryan because she loved the city so much, but Bryan’s presence sealed the deal. Life was sweet indeed.

At the beginning of September, Bryan had a surprise for Brittany: he was taking her skydiving!

“I was so excited,” she enthuses, “because I had never been before, and it had been on my bucket list for as long as I can remember. I was so very excited.”

One of Brittany’s best friends, Jenny, was going, too. (She’d received a tandem skydiving experience as a Christmas present from her husband.) Because of all that mutual excitement, Brittany didn’t suspect a thing.

“I was freaking out,” she giggles, “and I was just focused on surviving, so I didn’t suspect anything.”

On the day the happy group arrived for their jump at Piedmont Skydiving, Brittany’s heart was pounding for all the reasons. She didn’t think much about why Bryan stayed on the ground. That’s where Jenny’s husband was, anyway. Seemed legit.

“We got up in the plane, and all was well,” she continues. “But Jenny kept saying, ‘X marks the spot, Brit.’ I was, like, what is she talking about? But it didn’t really penetrate. I was just so focused on jumping. But then, as we were flying down under the parachute, I saw a big golf umbrella that had a big X painted across it. Bryan was hiding under it, in the middle of the field where we were going to land. I had no clue he was there. We landed right in front of him.”

The next few minutes, for Brittany, went by in a delighted rush — kicked off by the fact that, for some reason, Bryan had changed clothes. He was wearing a white button-down.

“The next thing I know,” she laughs, “he grabs my hands. And then I realized what was happening, and I just started crying.” She looked over to the edge of the Piedmont landing area and saw that both hers and Bryan’s families were gathered there to witness the engagement.

“After I said yes, it was a time full of emotion and happiness,” she beams. “We have a saying that we tell each other: ‘Never above you, never below you, always beside you.’ This saying came into play in our engagement–as I was quite literally above him, and he was below me and then when I said ‘yes’ we were beside each other. A sweet addition to our perfect day.”

Out of all the ways he could have chosen to ask her to marry him, Brittany’s stoked that he picked the perfect one.

“[The Piedmont staff] were all great, and they made everything possible,” she says. “It was really, really great.”

“Proposing this way was very much Bryan,” she grins. “It was very him to do something so dramatic and extravagant. I knew, when the time came, that it would be something very special–honestly, I’m  shocked that I didn’t suspect anything!”

Brittany and Bryan’s big day is April 25th of 2020, giving them about a year and a half of planning time. In the meantime, they plan to, enjoy every second and take it all in.

“Just remember to cherish one another and try not to get caught up in all of the rush!,” she adds. “Just enjoy the time you have together celebrating your love story, and cherish that.”