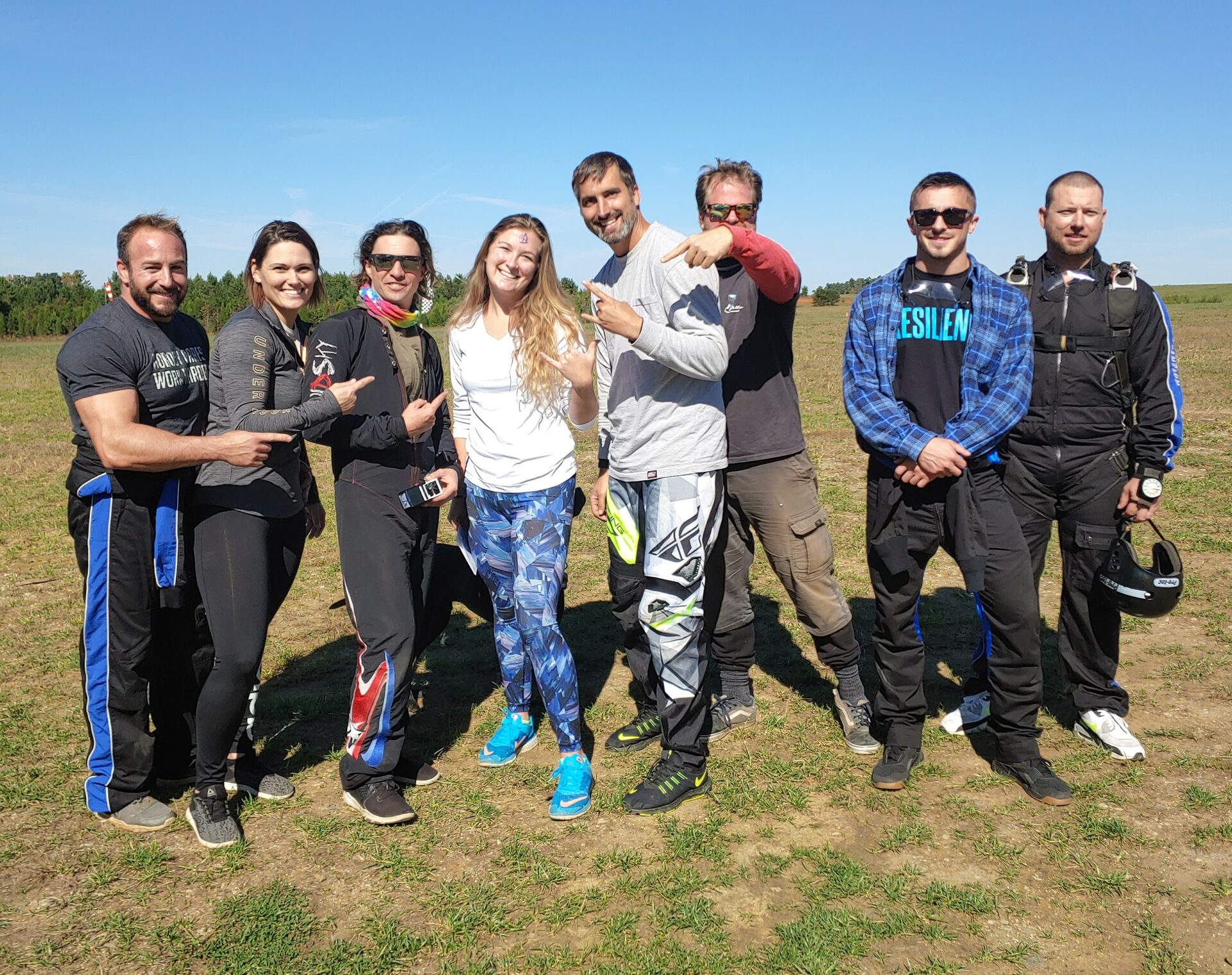 Kent Lupton loves the sky. He shares that love in a pretty unique way, too: He has been teaching the next generation of aviation enthusiasts at the Carolinas Aviation Museum for years. Suffice it to say, he has flown in quite a few airplanes. He knows the history. He knows the science.

Kent had never, however, cranked open the door of one of those airplanes at high altitude and seen it zoom off without him. Never, that is, last week.

“There will be plenty of opportunities to talk about it to my classes. It’s a very cool perspective on aviation,” he grinned. “Just another perk of the job!”

That job, as it turns out, is very cool. Founded in 1992 and located just alongside Charlotte Douglas International Airport, the Carolinas Aviation Museum is home to aircraft and artifacts from the advent of aviation (including the award-winning “Miracle on the Hudson” exhibition, featuring the famed passenger jet that crash-landed safely in New York’s Hudson River in 2009.) The museum’s mission is to “highlight stories of innovation, hope and heroism throughout the history of aviation and to “inspire visitors of all ages to pursue their own dreams and goals.”

Kent’s story–all the way up until his triumphant jump–is a great example of real-world dream-pursuit and goal-setting. Ending up in the aviation field was something of a career surprise (he holds a degree in environmental science), but it turns out that education is what Kent loves, so his work as an educator is a great fit.

“We work with a lot of school groups,” he explained, “but we also focus on daily programs and stuff we can add to the visitor experience to make it more exciting and more interactive.”

One of the newest additions to the Museum offerings was a flight simulator, complete with two pilot seats, a yoke and pedals. The kids love it–but that’s not all.

“We’ve had some hard-core, real pilots come in,” he said, “Who get quite a surprise because the controls are different to what they’re used to. They find getting the plane off the ground easy; then, when they go to land, it’s a whole new ballgame.”

Getting out of a real plane in real flight is another “whole new ballgame,” and Kent recognized that right away. He’d been in plenty of small planes before, sure–but the open door tends to change things on an elemental level.

Kent had a bit of a casual briefing from a long-time skydiver who volunteers at the Museum, but he was hardly prepared for the surprise he was about to receive when he arrived at Piedmont Skydiving: his tandem was manifested for the dropzone’s first 18,000-foot skydive (the highest in the Carolinas!). Not only was Kent going to go for a truly epic skydive–the kind of skydive you need supplemental oxygen to perform–he was going to be one of the first people in the Carolinas to do so.

“None of that surprised me,” he says, “because I knew, working in aviation education, about being on unpressurized planes at high altitudes–going through the mountains, for instance. When you get to a certain height, you’ve got to have oxygen.”

Right about then, it was time for the kind of first-hand, experiential education that the Carolinas Aviation Museum strives to give its guests: Except this wasn’t going to be a gentle walk through a hangar. This was going to be a 120-mile-an-hour classroom, kicked off by a climb up to the Earth’s mesosphere.

“They kept asking me if I had questions,” Kent laughs. “Uncharacteristically for me, I went with the idea that, if I asked questions, it might take my mind a little further than I wanted to go. But [the Piedmont Skydiving skydiving instructors] helped a lot just by being incredibly professional and calm. For them, jumping like this is an everyday occurrence, just like teaching at the Museum is for me. I get it. They made me sure that there was nothing, really, to be worried about. I knew I was going to enjoy the experience.”

Enjoy it, he did. Butterflies and all.

“I actually felt a little bit more comfortable than on a normal commercial plane,” he mused. “Which is good, because I was so excited that it felt like it took forever to get to 10,000 feet. After everyone else jumped, the climb felt like it was on fast-forward, and boom, we were there.

For someone who had never been in the open door of an airplane before in his life, Kent was remarkably calm–collecting data, no doubt, for his students.

“I was just absorbed into the experience and the fact it was happening,” he recalled. “I loved the freefall part of it. When we were freefalling, I got really into it. I didn’t really think about the fact that we were shooting towards the ground at 120 miles per hour.”

When you ask Kent if his landmark skydive is going to inform his teaching going forward, he gives an enthusiastic “yes.”

“There are so many small-plane pilots who visit the Museum,” Kent explains, “But not all of them go up to super-high altitudes, so it’s interesting to engage with them about the procedures you use when you’re not in a pressurized plane and you have to be on supplemental oxygen; when you need it, and how it’s done.”

“Skydiving is something that I would definitely encourage others to do,” he enthused. “Go for that experience! Word got around in the museum about [my jump], so I ended up talking to a lot of our volunteers about what it was like and how cool it was. I describe it as a rollercoaster ride that has no restraints. It is just free, and open, and you’re going with it. I’m looking forward to my next one, for sure.”